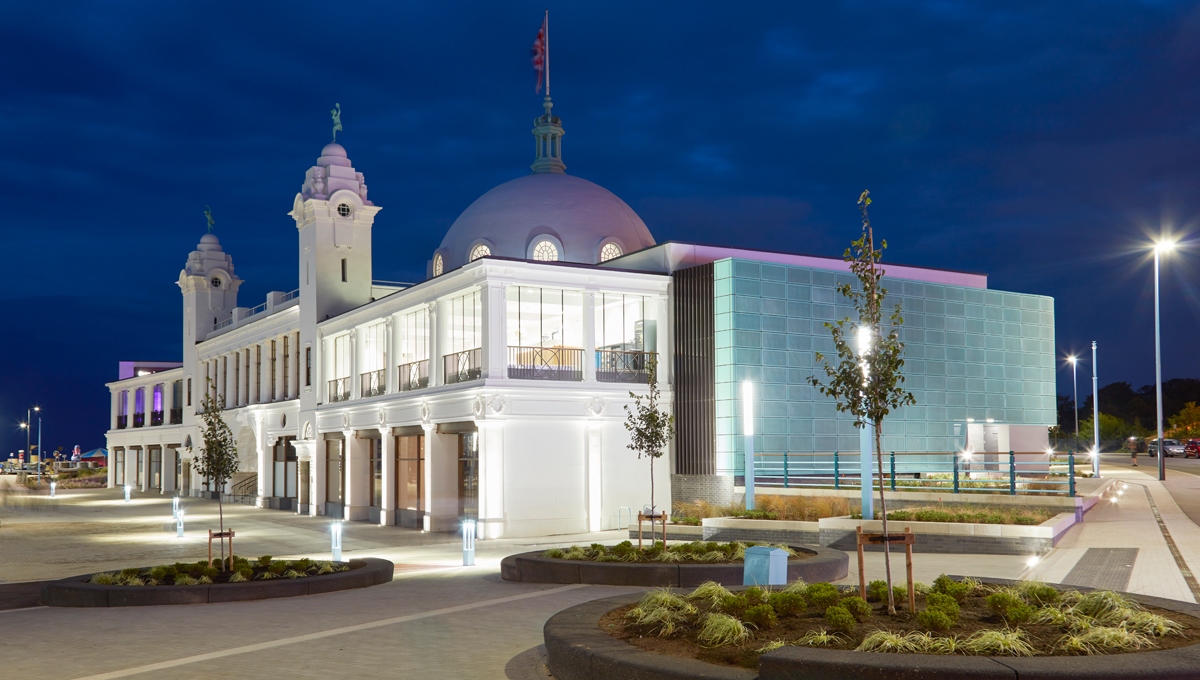 How to specify a perforated thin gauge metal facade?

A wide range of different metals are commonly used for cladding, each with its own distinctive aesthetics, including copper, brass, bronze, zinc, steel and aluminium. Some are higher value and more sought-after than others and this blog looks at how it is still possible to specify these kinds of perforated metal cladding systems whilst delivering the client an engineered solution.

Aluminium and steel are routinely used for facades because the metal is widely available, which means that they can provide a cost effective solution, even when the thickness of the metal on the face of the panel has to be increased for wider panel spans. A thicker gauge metal is used to maintain rigidity and avoid deflection on these larger panels. Increasing the thickness of panels made from steel or aluminium has a limited effect on cost (for example, doubling the thickness does not necessarily double the cost). However, the weight will increase which would have an effect on the structure and the labour requirements for installation.

Other cladding materials, such as copper, brass and zinc are higher value and this can require a different approach where the client likes the aesthetics but is concerned about value for money. In these situations, particularly if the design requires large span cladding panels, which are often preferred because they are visually stunning, then designers have various considerations to take into account.

Copper Alloys and Zincs have limited thickness options, copper, for instance, would double in cost by doubling the thickness of the metal due to the material being priced by weight. This has a considerable effect on the overall cost of the façade for a given amount of area. In addition, a designer would face minimum order requirements from the copper mill, which needs to be considered, particularly for rainscreen facades that cover a smaller area. This can mean that these higher value metals are no longer an option, resulting in design compromises, which is far from ideal. From an engineering perspective, too, doubling the thickness of these metals doesn’t give a double span capacity and designer would still have the likely implication of requiring a secondary support structure to the rear of the panel.

In these situations, we have developed a way of allowing designers to retain the original façade design in higher value metals. A lightweight strengthening frame that is fixed behind the panel, which it means a thinner gauge metal can be specified even on perforated facades.  And, with copper and zinc being readily available in thinner gauges and typically have no minimum order requirements (subject to manufacturer), it creates a workable solution on more projects.

We used this approach recently at Mulberry Park School where the architect’s liked the look of our perforated copper panels. Using our unique framing approach, meant that a thinner perforated copper skin could be used on the face of the panel without resulting in deflection or distortion. However, this system usually only works with external to internal visuals like those at Mulberry Park Hub because the strengthening frame remains hidden from people looking onto the building from the outside, if the perforation pattern and frame are developed in unison.

It was slightly different at Spanish City, featuring our Proteus SC TECU Patina Copper because the perforated cladding panels were fixed over extensive glazed areas and so were visible by people inside the building looking outside and vice versa.

This presented an engineering challenge because the architects were working to a defined budget and had envisaged large cladding panels because of the sheer size of the façade (larger cladding panels on large facades can look more visually striking). Increasing the thickness of the copper wasn’t an option on this project, either, because of the reasons listed above. It was an added engineering challenge that the support framework behind the panel would be visible from both inside and outside the building.

Working with ADP architects we devised a rear supporting aluminium PPC framing system that was discrete and avoided having to increase the thickness of the copper. The outcome was that it enabled the panels to be designed to meet the maximum optimisation of material, whilst working within the challenging geometry of this project. Alongside the strengthening system we used our standard aluminium support frame with brackets fixed back to the main structure through the render layer, and this required close design co-ordination between the two systems.

It’s worth noting that both Spanish City and Mulberry Park Hub both feature perforated panels. This is another way of optimising use of material whilst at the same time creating a façade that looks like no others. The cut-out metal from the perforations can be 100% recycled. For more ideas on perforated cladding take a look at our case studies.

In the quest for improved cost-effectiveness and to meet project aspirations, specifiers have a number of choices and one of these is to optimise the use of metal in the façade. Set against this is the need to ensure the panel meets performance and aesthetic requirements – quite a challenge with the trend moving towards larger panels and more efficient use of materials. Increasing the gauge of the metal would seem the obvious solutions, although this is not always possible due to other constraints. Conversely, using our unique strengthening system can ensure your solid or perforated metal rainscreen cladding façade stands out as something special.