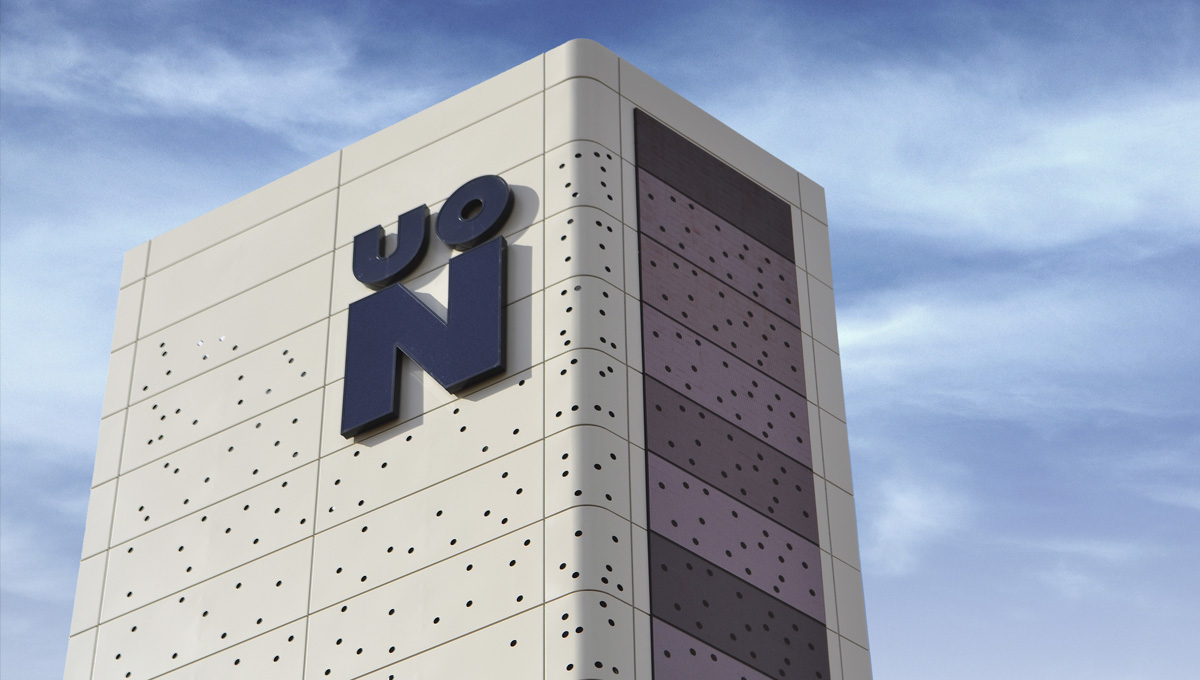 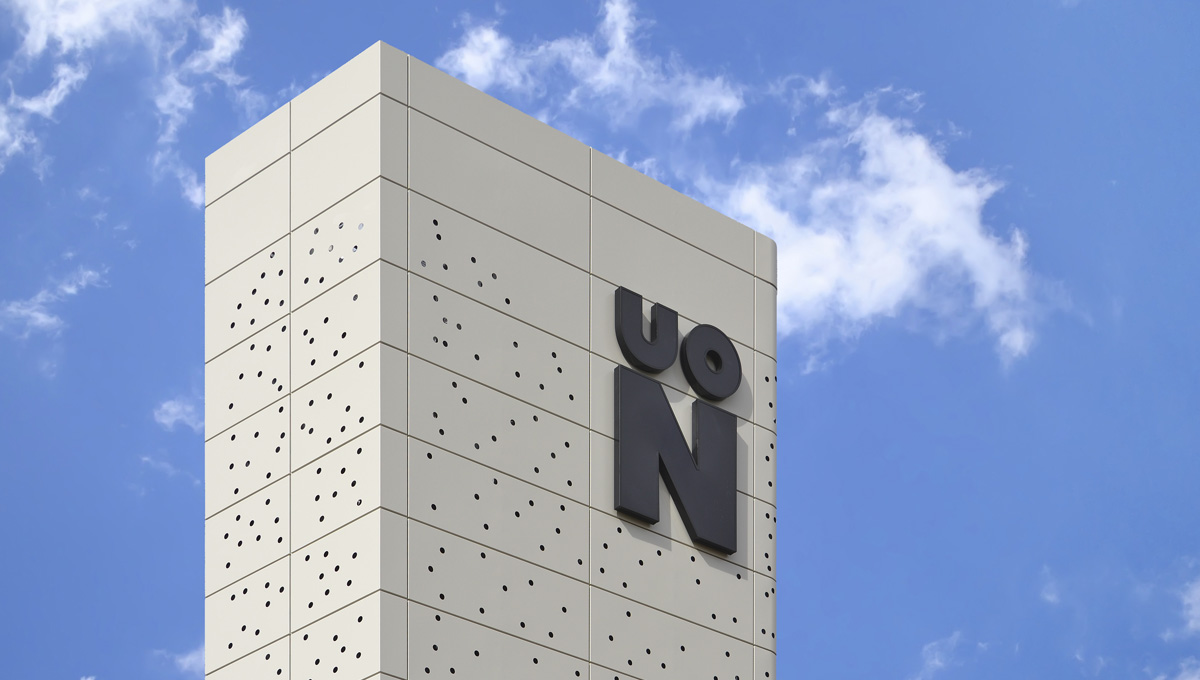 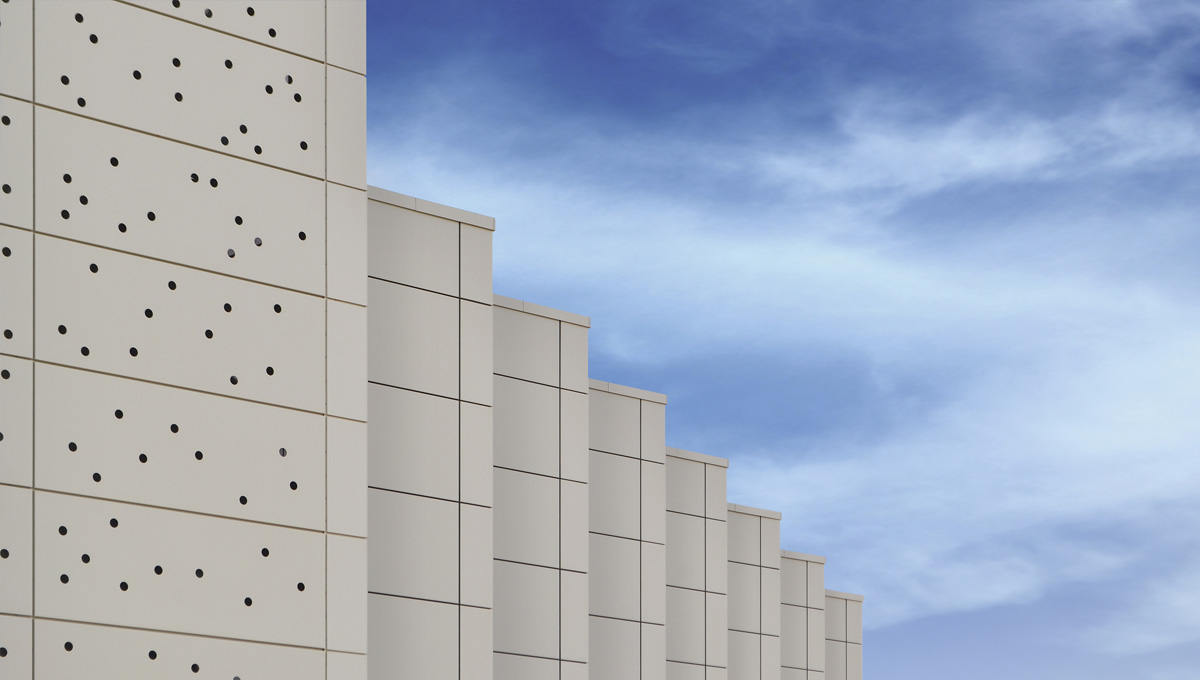 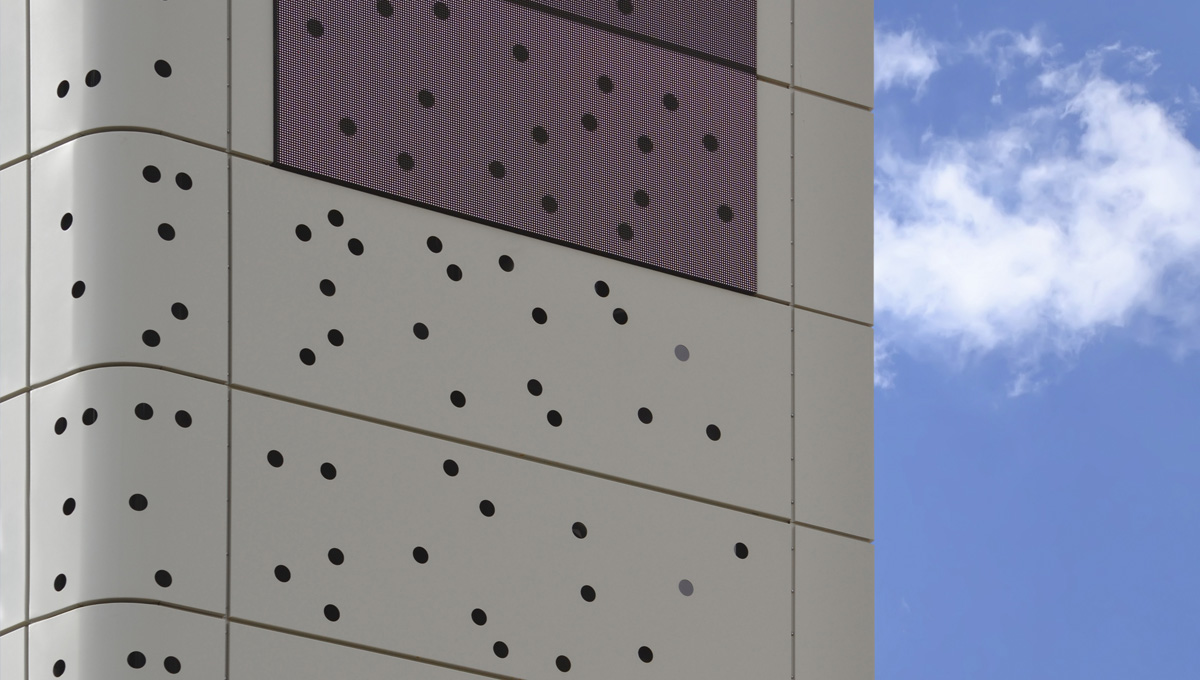 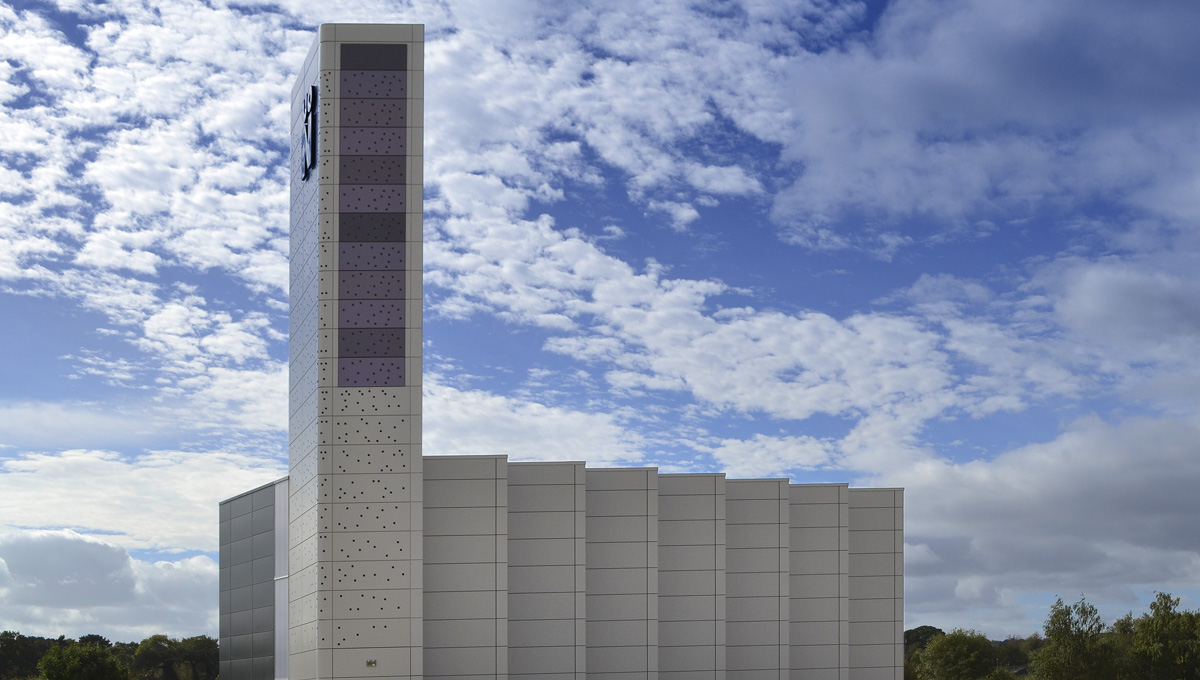 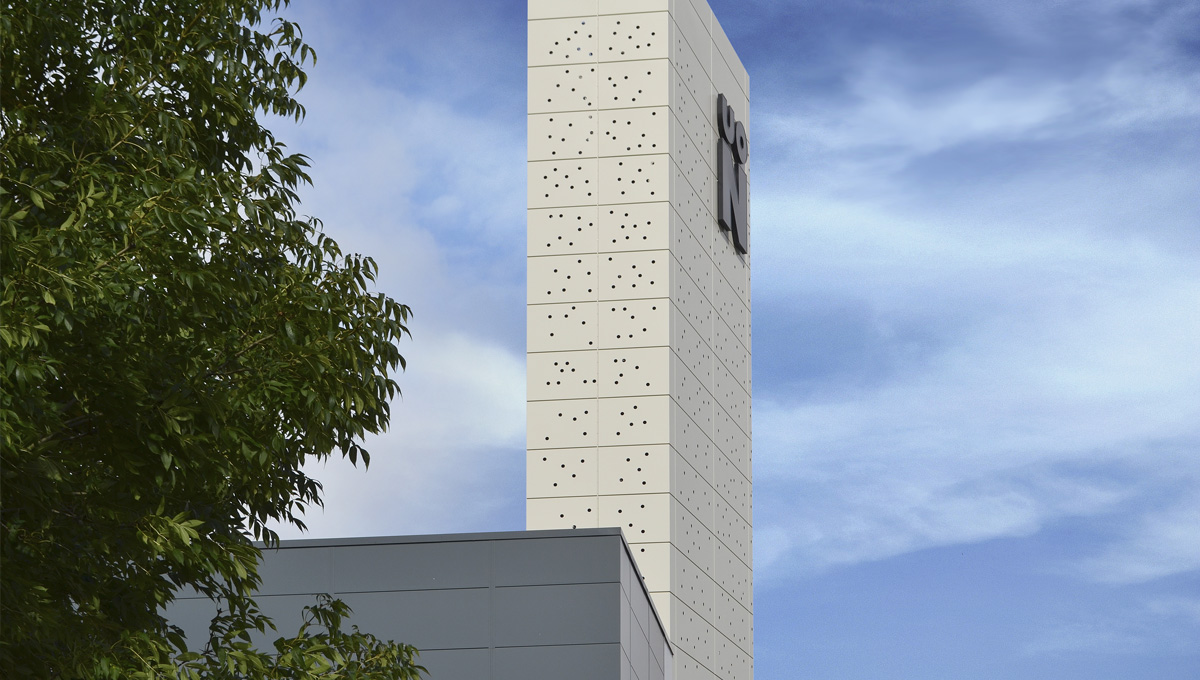 Proteus Facades has helped create a striking new feature on The University of Northampton’s Riverside Campus in the form of a 26-metre flue shaft on its new £6.9m biomass plant, completed with Proteus cladding panels and an integrated LED screen.

Further visual interest was added to this project by the juxtaposition between the Proteus SC perforated panels specified for the flue stack and Proteus HR solid cladding panels used to create the unusual vertical saw-tooth façade design on the Energy Centre’s main building.

This was a challenging project for MCW architects because the designers had to work around the constraints imposed by the requirement for a large ‘box’ like structure to house a 1MW biomass boiler, four 4MW gas boilers and a 120m³ thermal store.

Proteus HR solid metal skin with honeycomb core was used around the thermal envelope of the building combined with polycarbonate cladding in a striking internally lit vertical “saw-tooth” arrangement. The lightweight, exceptional flatness, strength and rigidity of Proteus HR panels allowed the architects to develop a large modular cassette system (2500x1000mm), which was replicated around the building providing uniformity across different façade elements.

An equally engaging aesthetic was achieved on the 26m high stack by wrapping it in the Proteus SC perforated ‘skin’, creating a sense of weightlessness in what would, at the height of three London buses, have been quite an imposing structure. The back-lit random perforations now appear as though they are pixels being projected outwards from the 12m LCD screen, whilst the elongated landscape perforated panels play with the eye to visually truncate the stack’s overall height.

The screen itself provides the university with a useful information bulletin that showcases courses and events as well as being an advertising medium, both of which have the potential to generate a useful secondary income stream.

In order to achieve the ‘random’ pattern for the perforations, each of the Proteus SC panels on the flue stack had to be manufactured to a specific drawing reference and to millimetre tolerances. This involved changing the location, number and layout of the perforations on each panel. The pitch of each hole had to be calculated so that they passed seamlessly over panel joints.

Proteus also addressed the aim of establishing a seamless link between its perforated panels on the stack and the 12m high LED screen. This was done by working with the architects, screen suppliers and façade installers, Deane Roofing and Cladding, to create a bespoke tray system allowing the screen to be recessed and the perforated panels butted up flush with the edges.

“While the building function is essentially utilitarian and technical, the external envelope has been developed to create a visually strong elevation to the campus celebrating the University’s commitment to sustainability.” said MCW architects. .”

Both the Proteus SC perforated and Proteus HR solid cladding panels are executed in polyester powder coated aluminium in RAL 7044 Silky grey, creating visual integration between the stack and main building below.

The new Energy Centre forms part of the £330m Waterside Campus Development at the University of Northampton. It will provide sustainable heating and hot water for all the buildings and student residencies on the 58 acre site, whilst saving over 1,000 tons of CO2 in the short term, rising to 2,200 tons a year following the introduction of a Combined Heat & Power Engine.