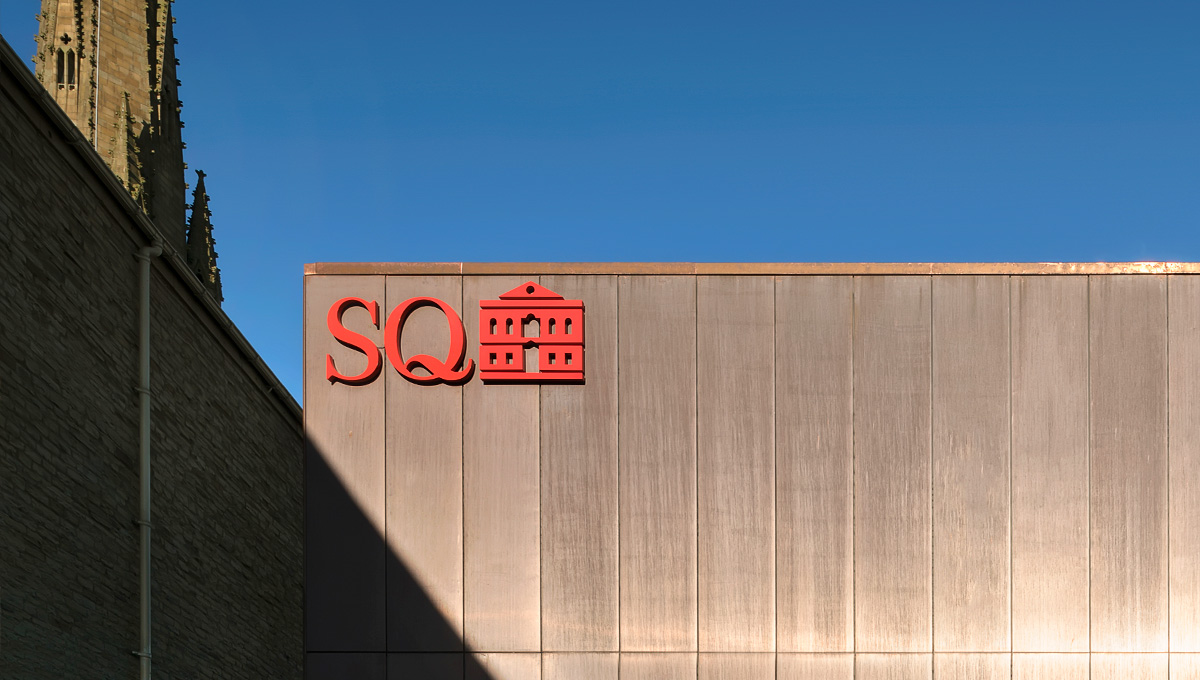 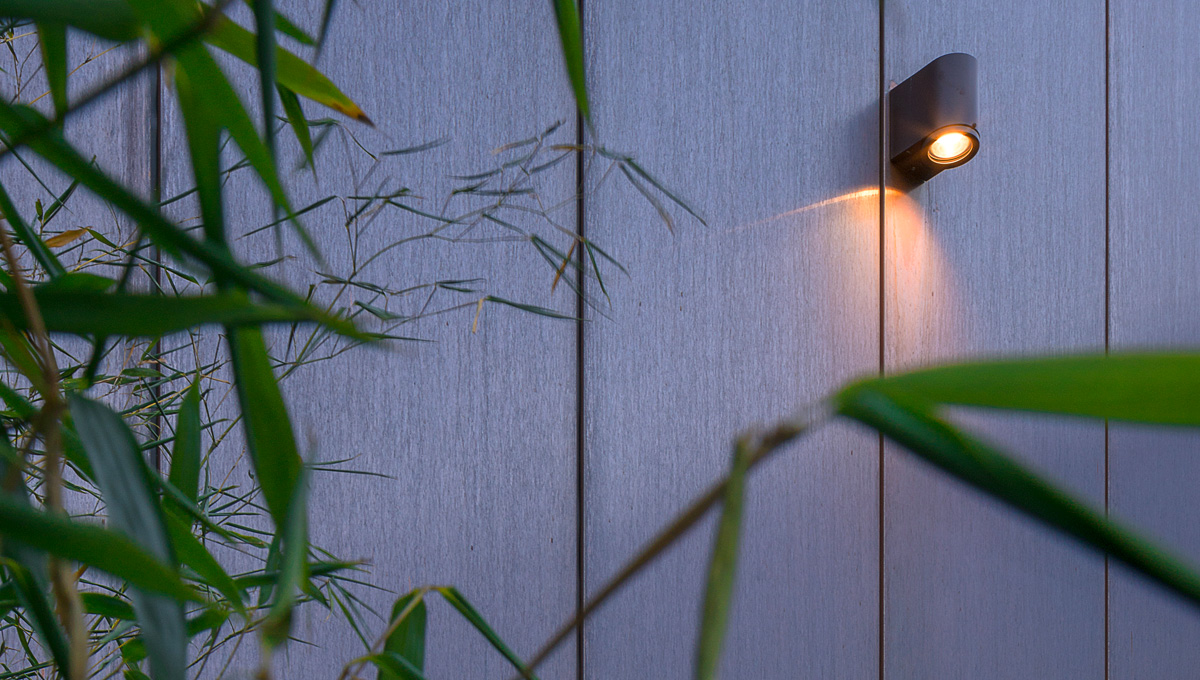 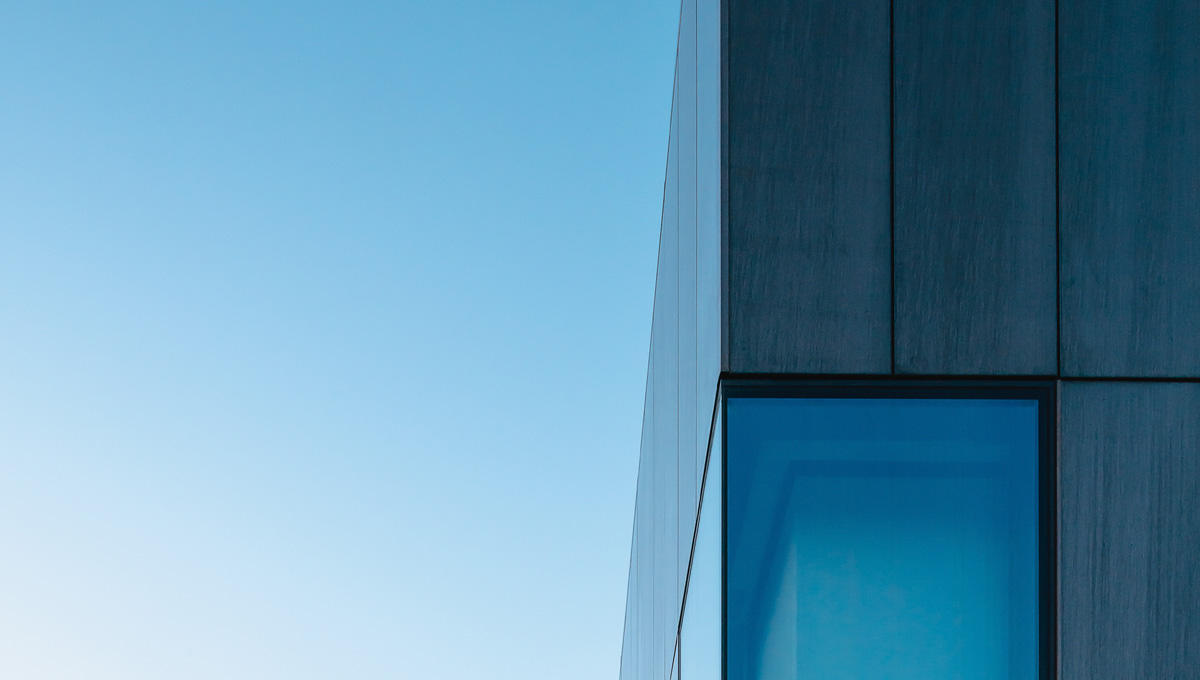 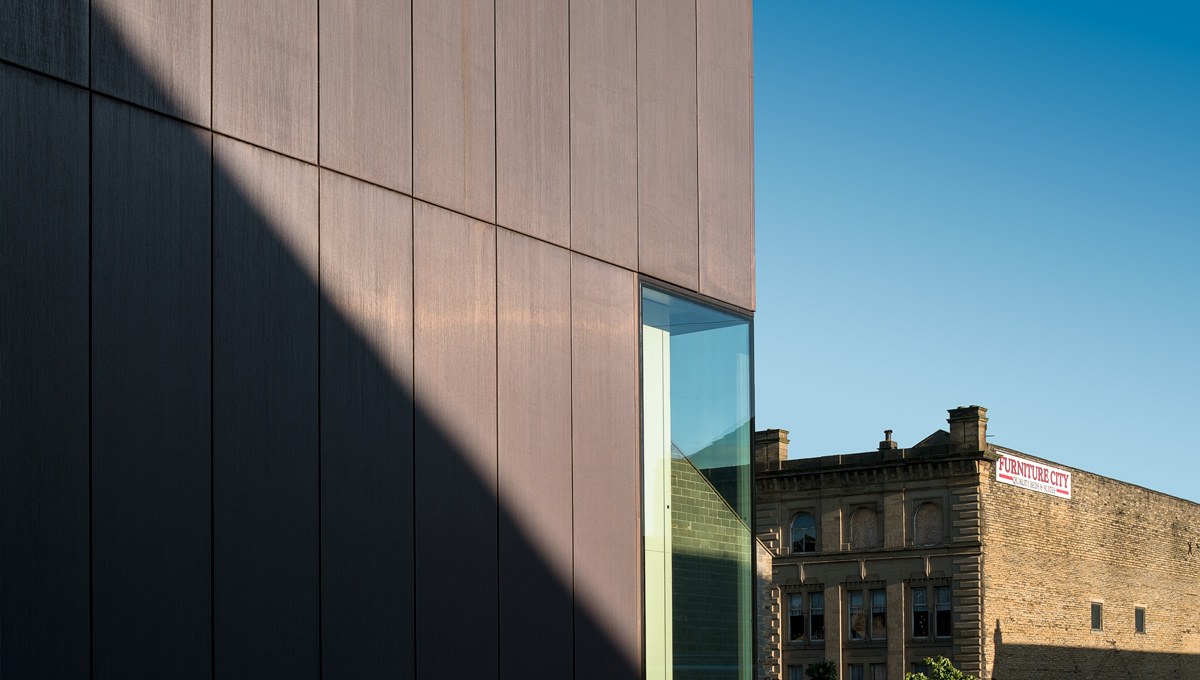 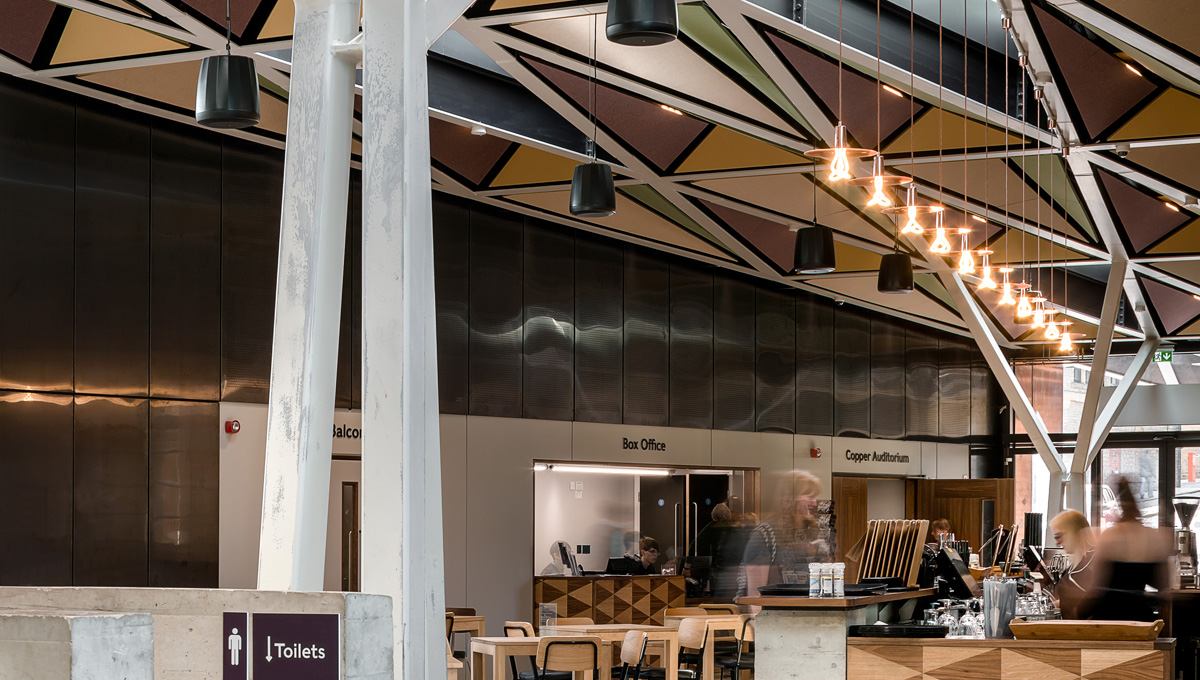 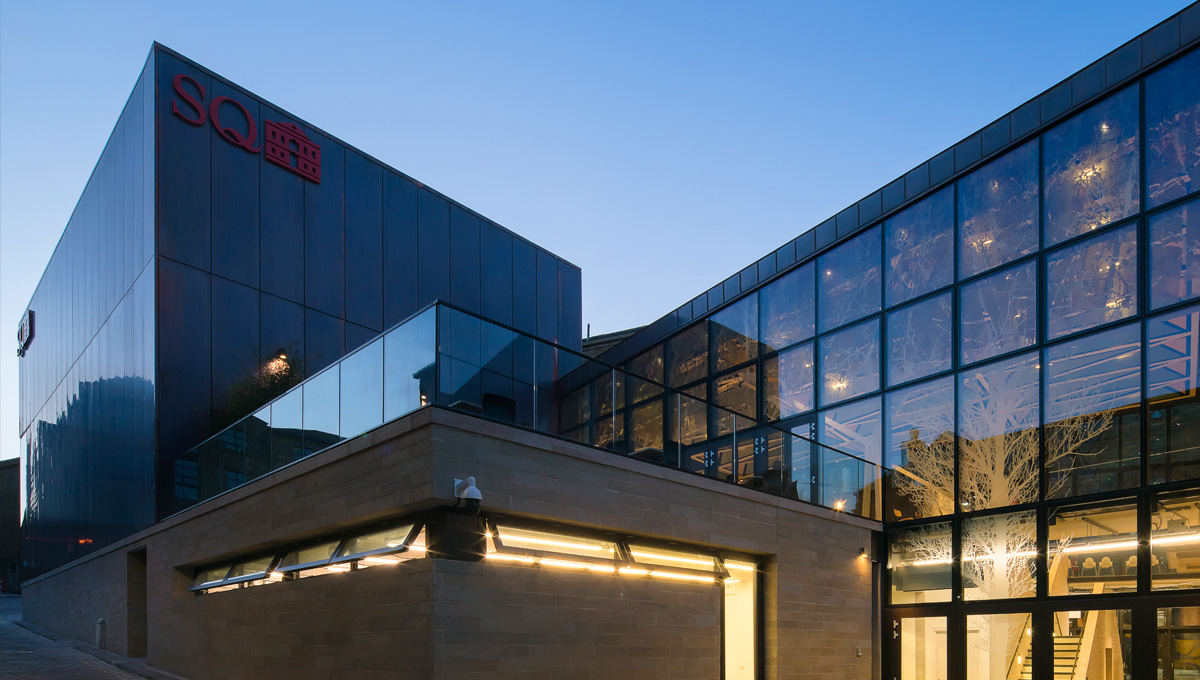 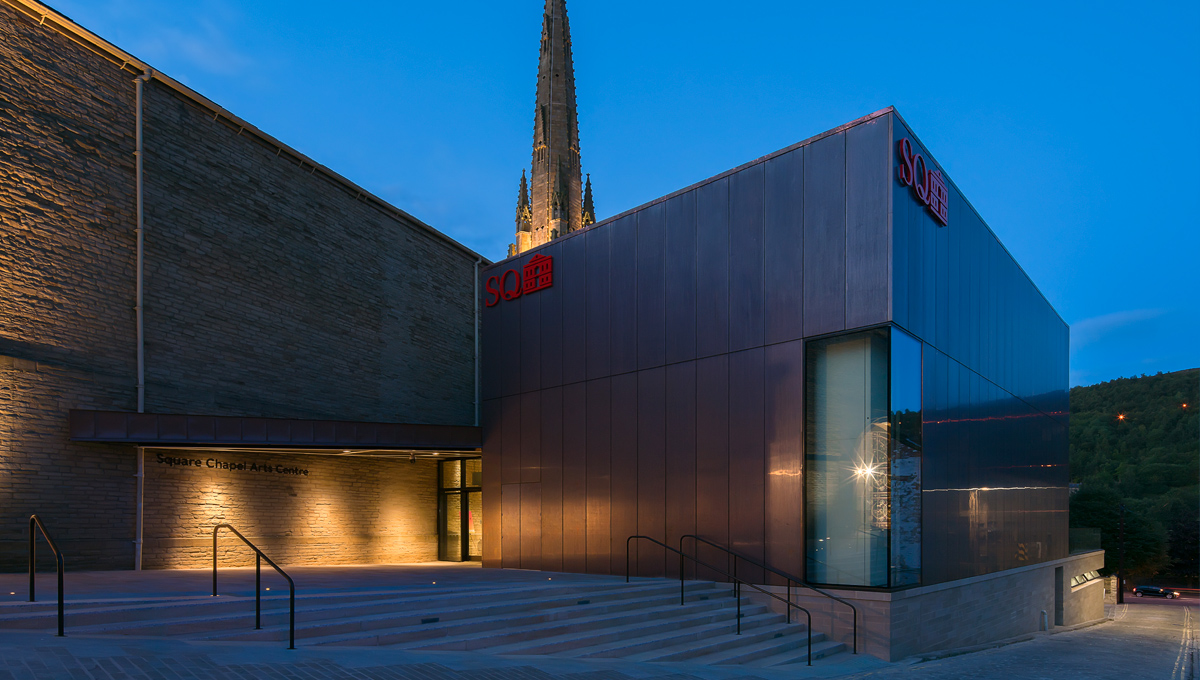 Proteus HR TECU Classic rainscreen cladding was used for the exterior façade of the new extension, which sits alongside the original building and more than doubles the size of the arts centre.

The Proteus HR system features an aluminium honeycomb core structurally bonded between two thin gauges of metal, which in the case of the rainscreen panels at Square Chapel were TECU Classic copper.

The honeycomb core of the Proteus HR system creates a lightweight, strong and optically flat surface. This enabled the designers, Evans Vettori Architects, to elongate the facade panels, accentuating the cubic shape of the new extension and complementing the skyward reaching Square Church spire beyond.

Proteus TECU OXID HR and SC panels were used for internal cladding around the catering area and lift shafts. The material was selected because it is pre-oxidised, giving it an attractive and engaging surface from the moment it is installed.

Gradual changes to the TECU Classic rainscreen cladding panels as the copper material oxides with the effect of wind, rain and sunlight, will create striking and attractive colour variations. Eventually, the natural tones created by this process will complement the Proteus OXID pre-oxided panels used inside.

Ultimately, this oxidation process will result in the exterior rainscreen façade matching the Proteus OXID HR and SC panels used for the internal areas. This fusion between the two elements will blur the boundaries between where the outside ends and the inside begins, drawing visitors into the arts centre.

The Proteus SC perforated panels used internally add to the aesthetic created by the pre-oxidised material. The overall result of the façade solution from Proteus is an image of modernity, yet one that still gives a nod to the heritage of Halifax and formal approach of the original Methodist movement.

Robert Evans, director at Evans Vettori Architects, said: “We specified TECU material from Proteus because we were looking for a rainscreen façade that would give the new extension its own distinct identity whilst at the same time harmonising with the existing historic buildings. In a world-renowned location such as this, with the Grade I Piece Hall on one side and existing Grade II* Square Chapel, that was quite a challenge.”

Robert added: “We liked the fact that Proteus was able to supply both the rainscreen facade and internal cladding elements using TECU material. Overall it has helped create a striking aesthetic and one that will change and evolve just like the buildings on site have done over the years.”

The team at Norman and Underwood installed the rainscreen facade, internal cladding, traditional handcrafted roofing and curtain wall glazing elements. The main contractor on the project was Derbyshire-based Wildgoose Construction.

The project received donations from Arts Council England as well as various other sources. Square Chapel Centre for Arts was completed in summer 2017.