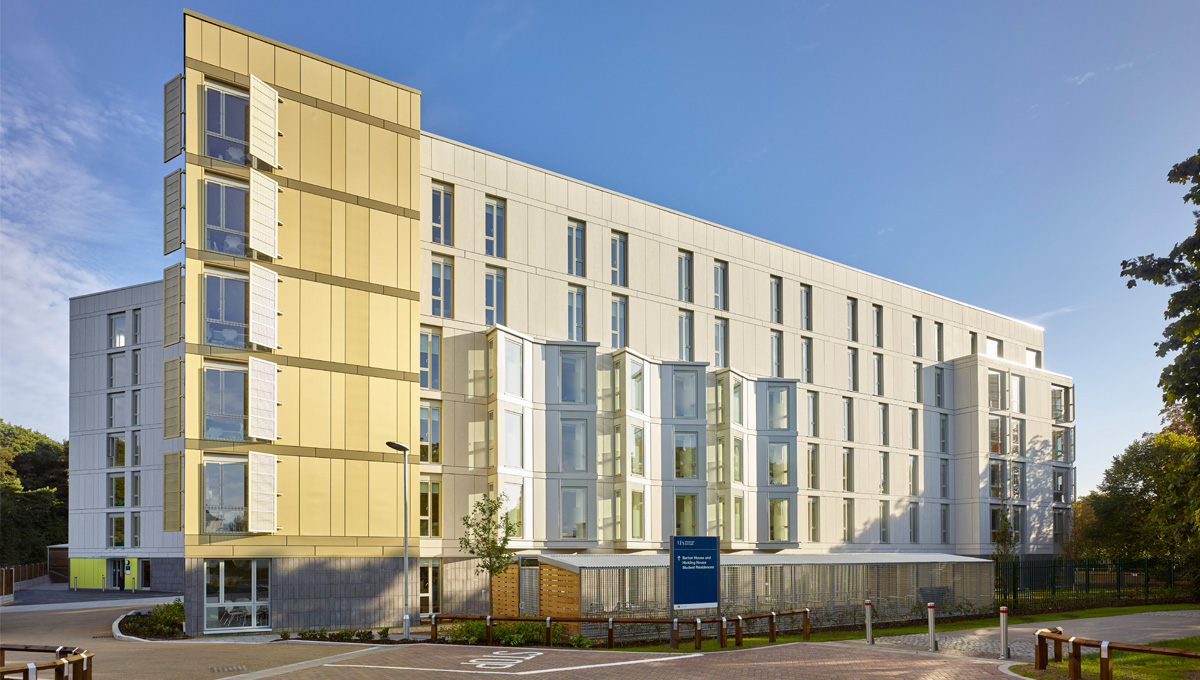 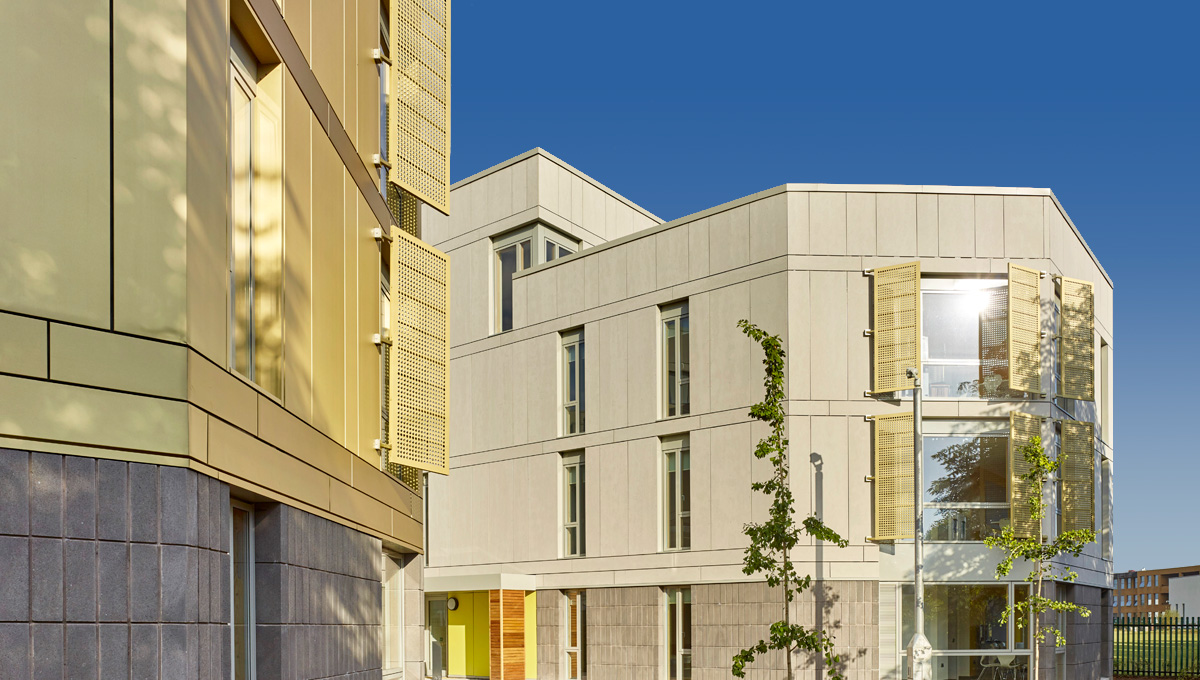 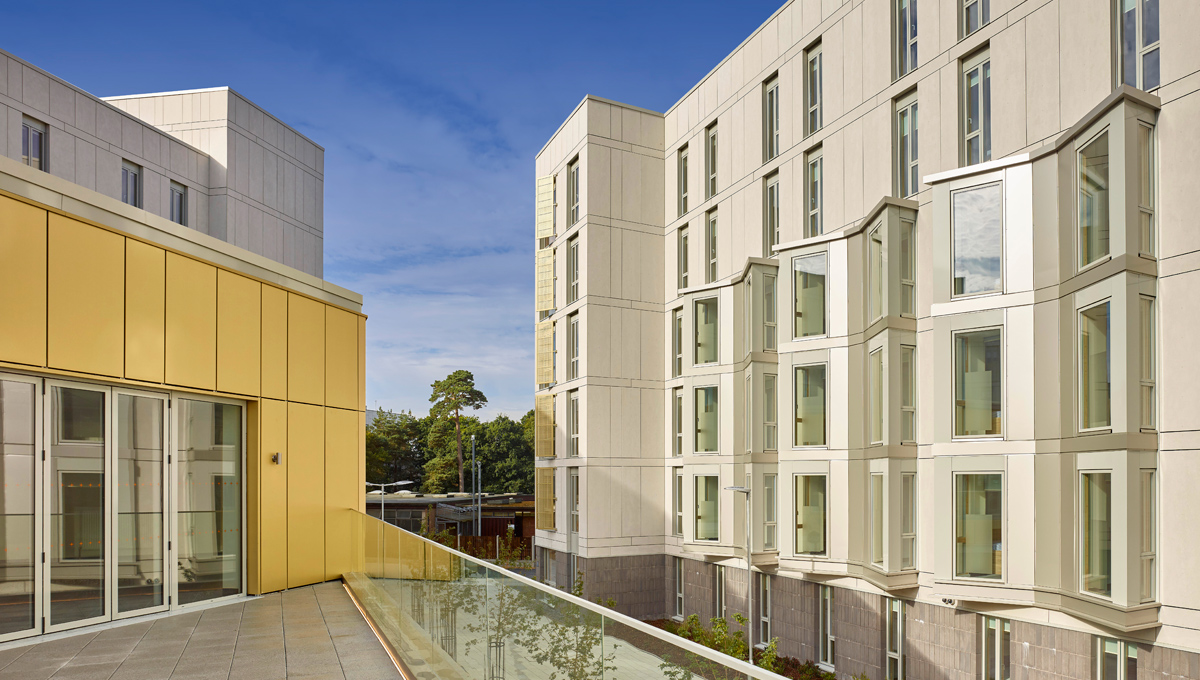 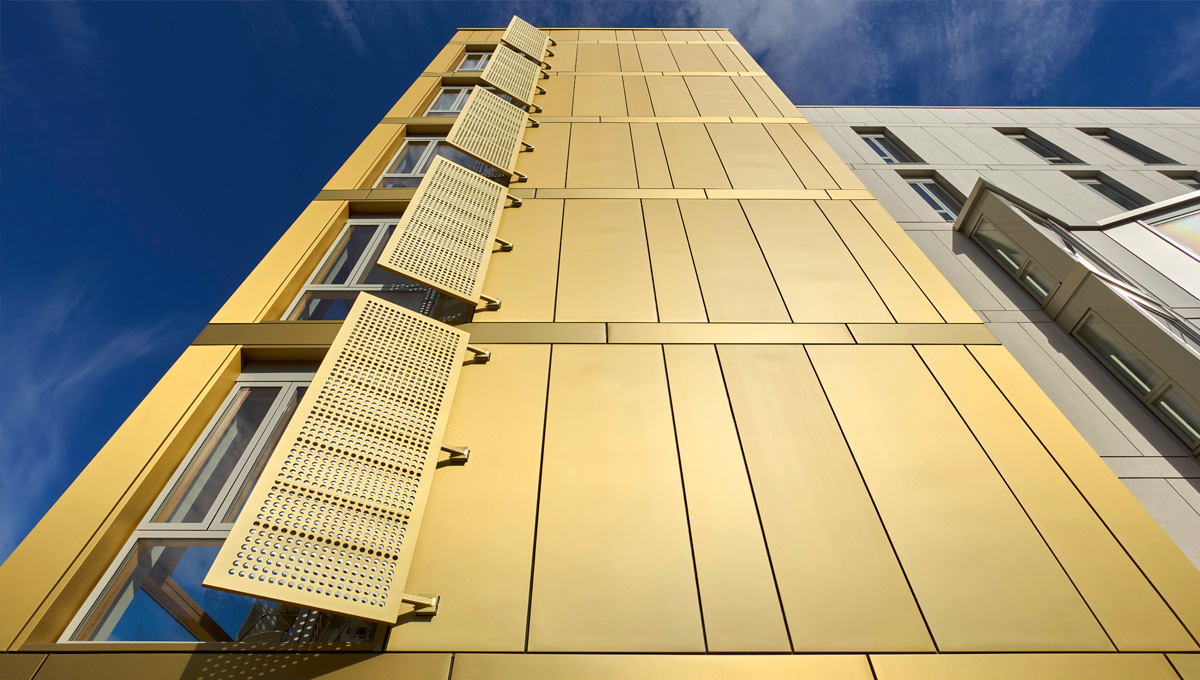 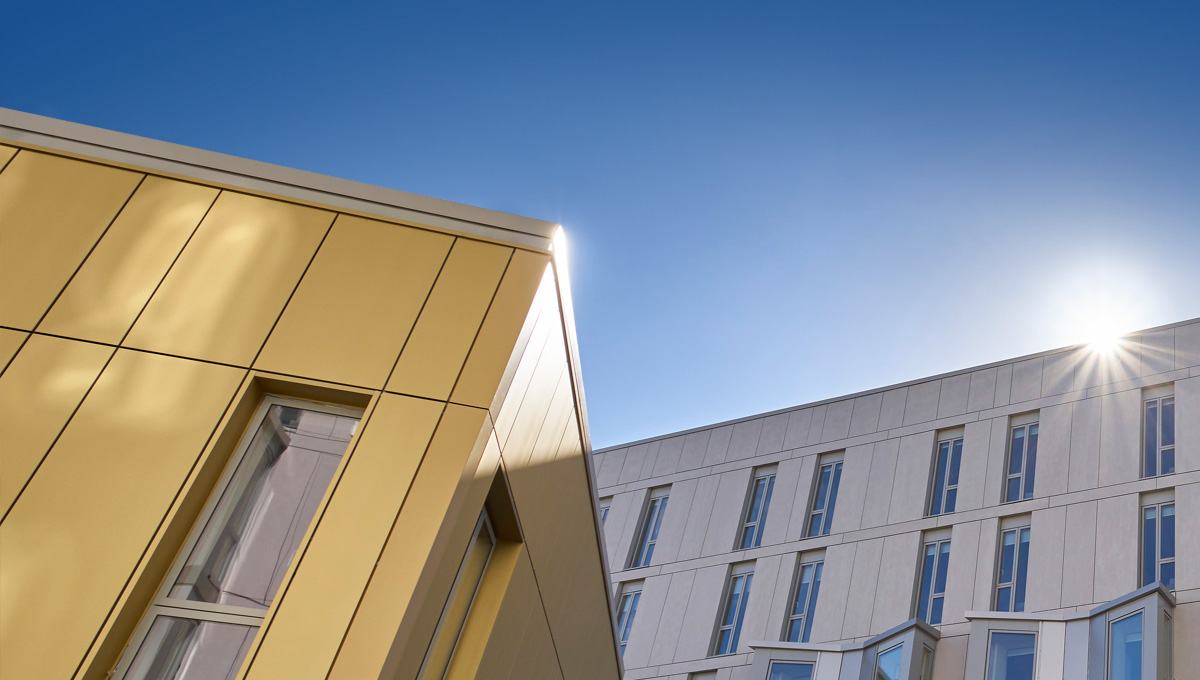 Proteus HR cladding in elZinc Rainbow Gold has been used to create an eye-catching aesthetic on two new student residences at The University of East Anglia (UEA).

The first floor of a central building situated between Hickling and Barton House is clad entirely in Proteus HR eIZinc Rainbow Gold panels at first floor level. The iridescent gold finish reflects the light, illuminating the adjacent houses to add to the overall dramatic effect.

LSI Architects set out to create a design for the two new student accommodation buildings that would relate directly to the original campus designed by visionary architect Denys Lasdun, as well as the local environment.

Lasdun’s original 1960s Teaching Wall had a distinctive stepped appearance, created by each successive storey being set back from the one below. This iconic ‘ziggurat’ – a rectangular stepped tower – remains as striking as ever and provided the inspiration for the new student accommodation buildings that feature the Proteus cladding.

The Proteus HR elZinc Rainbow Gold cladding panels gave LSI more design scope to replicate the most striking element of Lasdun’s creation – a modern interpretation of the stepped ziggurat design was created by projecting the accent cladding outwardly from the grey facade.

Proteus HR is an integrated modular rainscreen cladding system that consists of an aluminium honeycomb core, structurally bonded between two thin gauges of metal skin. The lightweight yet strong panels are available in a wide range of colours and materials including steel, aluminium, zinc, stainless steel and copper alloys.

The Proteus HR elZinc Rainbow Gold panels were made from rolled titanium zinc, which forms an attractive and durable finish. The elZinc Rainbow range is available from Proteus in a range of graded colours. It is made by applying mineral pigments to create an organic, iridescent coating that provides additional protection against corrosion.

“Proteus HR accent cladding in elZinc Rainbow Gold delivered an aesthetic that lifts the whole development in a similar way to Lasdun’s striking stepped ziggurat,” said James Lake, Architect at LSI. “The elZinc provides a beautiful contrast to the other façade materials and has the effect of transforming the whole aesthetic. It complements Lasdun’s original design, whilst the iridescence gold finish gives a nod to modernity.”

Each panel at UEA is supported by the unique Proteus system of aluminium carriers and ancillary components, which can be installed on to any type of wall construction. Main contractor on this project was RG Carter, with the Proteus rainscreen cladding being installed by Deane Roofing & Cladding.

Having a honeycomb core means that the Proteus HR panels deliver maximum compression and shear resistance with minimal material. This helped the development at UEA minimise the load transferred to the main structure, significantly reducing overall material requirements compared to the original concrete structure.

The project achieves a BREEAM Excellent rating and both new buildings have been delivered to BIM Level 2 including the delivery of an Asset Information Model.