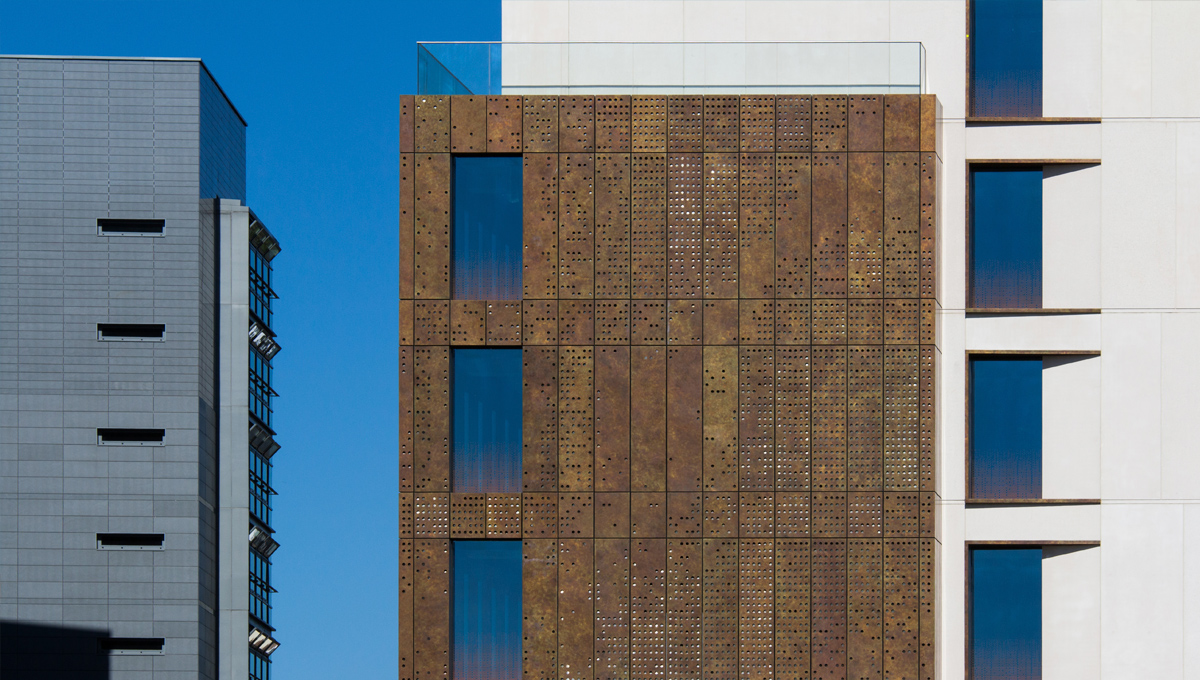 Is grey still the most popular rainscreen façade colour?

Imperial College London is a world-class university with a mission to benefit society through excellence in science, engineering, medicine and business. Its new Molecular Sciences Research Hub forms the centre piece of the Imperial West campus. The vision for the building aesthetically was for it to outwardly portray the innovation that would take place inside. A tough brief, but one Proteus Facades was well equipped to help deliver.

The striking, CAP 55 finished, SC perforated panels, from Proteus Facades, are in TECU Brass with a Capisco patinated finish. Aukett Swanke specified these panels early in the design process at Imperial College as they perfectly complemented the new building’s flat, bare concrete facade and glazed elements. Proteus Facades can also supply the CAP 55 finish in either Brass or Bronze materials, as wide panels. This was important in the Imperial College Research Hub project as the TECU Brass Proteus SC perforated panels were developed in conjunction with the supporting composite panels.

Elias Niazi, Design Principal at Aukett Swanke explained: “We specified Proteus SC because we liked the wide panels of its TECU Brass perforated system, as well as the company’s ability to work with Capisco on what is a completely bespoke cladding solution.”

Proteus SC was also an obvious choice because of Proteus’ ability to work with patination specialist Capisco to create a totally bespoke cladding solution, befitting the innovative nature of the building.

The CAP 55 effect was hand applied by Capisco, giving the Proteus SC TECU Brass perforated panels an enhanced flow, feel and texture. The appearance of the perforated and patinated panels in-situ changes depending on the level of sunlight and the angle at which they are viewed from. The end result is a strikingly beautifully aesthetic that appears to move and shimmer across the visually flat facade beneath. The perforated panels seamlessly transition through the entrance glazing to form a striking feature within the atrium entrance. This creates an impressive solar composition, accentuated by spotlights, when visitors cast their eyes upwards.

The Benefits of Rainscreen Cladding

Rainscreen cladding protects the structure of a building from the elements. But it does so much more than this; rainscreen cladding can also increase a building’s energy efficiency, modernise a tired and dated building (as an over clad solution) and help to create striking designs, like the facade at the Imperial College Molecular Sciences Research Hub. Proteus SC is an engineered panel system in either solid, perforated or expanded mesh panel formats utilising an extensive range of metals, colours, textures and forms. It has a wide range of applications including:

Until relatively recently, building designers tended to stay with the proven elegance of grey and other neutral colours for the facade. Increasingly, on some projects, it is appropriate to use bolder colours and patinations, as shown at the new Imperial West campus. Here, the designers have delivered an uplifting, engaging aesthetic that sets the tone for what happens inside. Armed with this understanding and appreciation, metal rainscreen facade continues to grow in popularity and have the ability to do for our cityscapes what pre-cast concrete did for the followers of Corbusier in the 20th Century.